We're looking here at several places near the upper or inner ("indre") reaches of the Sognefjord, Norway's longest. The name of the fjord comes from Sogn, a 17th century name for this region of Norway, and that name in turn may derive from the tides at the fjord's mouth. The connection is that "suge" means "suck". 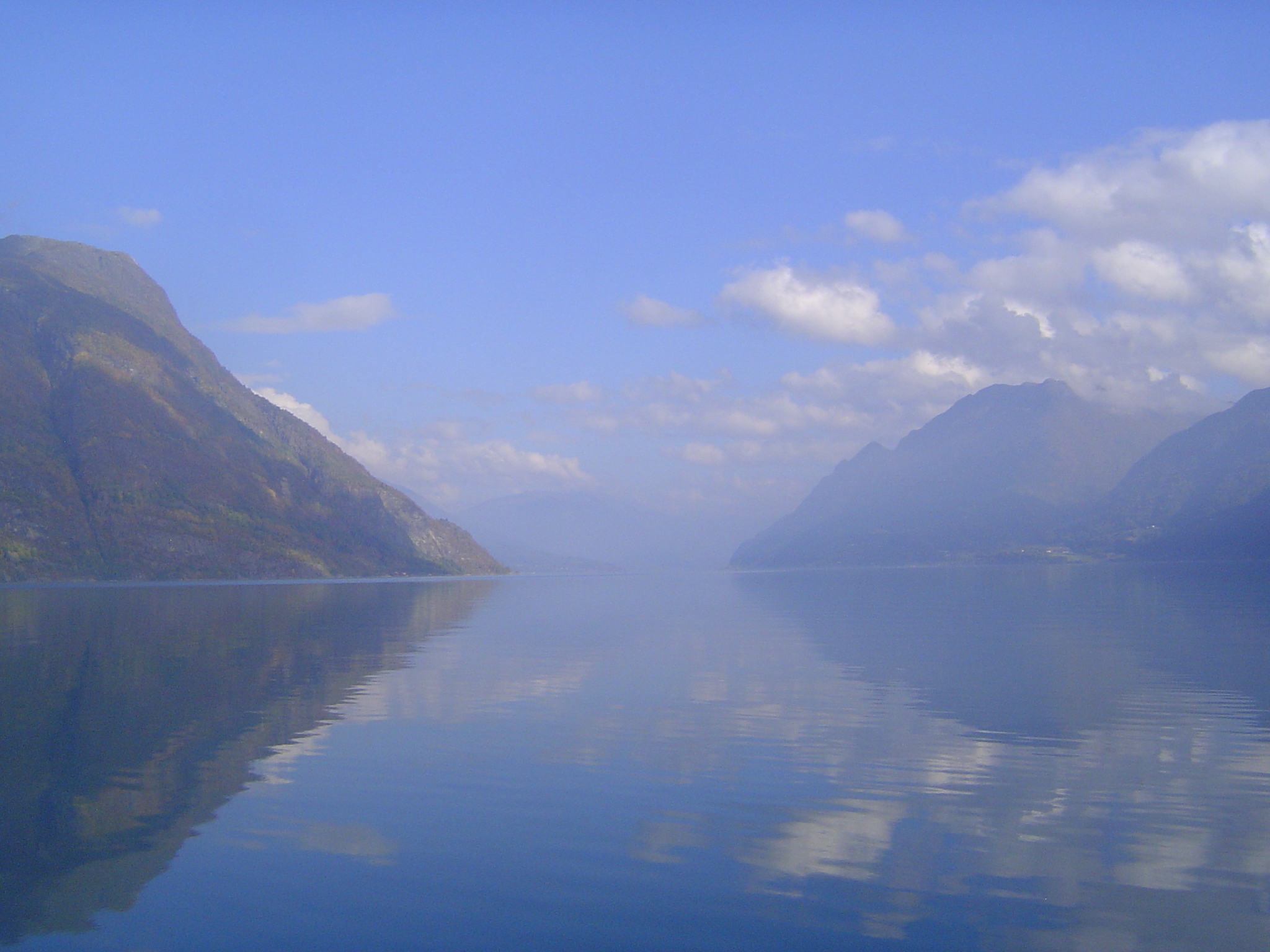 Here we are looking upstream along the uppermost branch of the fjord, the Lustrafjord. We're over 100 miles from the ocean, but the end of the fjord is still another fifteen. The ferry we're on is crossing the fjord, not traversing it longitudinally. No need for boats to do that now, what with roads. This is early September, by the way. 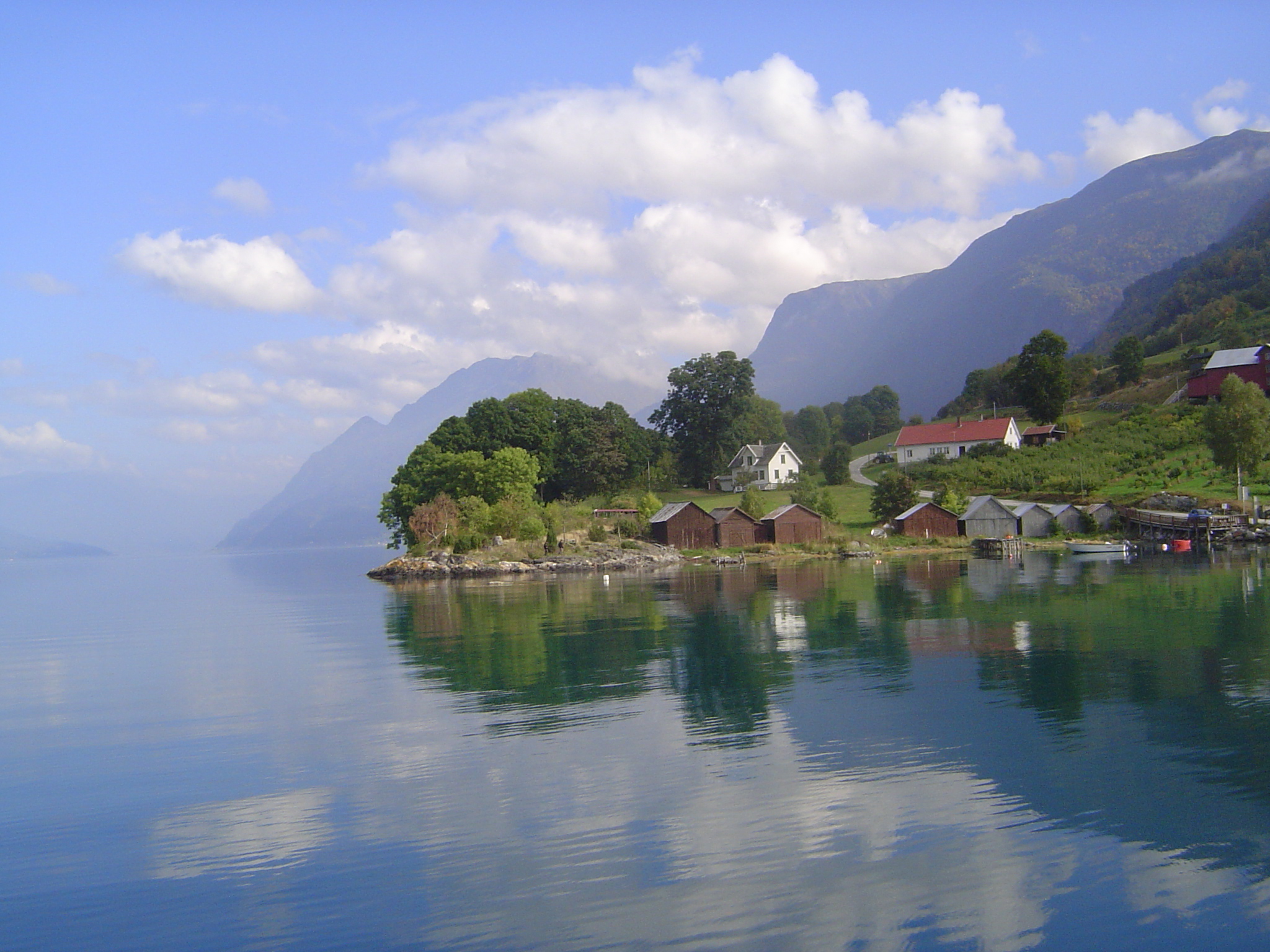 The hamlet of Urnes lies on the east bank. Boathouses hint at the fjord's historic role as a highway; now, though the small car ferry we're on runs back and forth across the fjord, a good road also winds up one side and back down the other. We'll make the hairpin-loop. 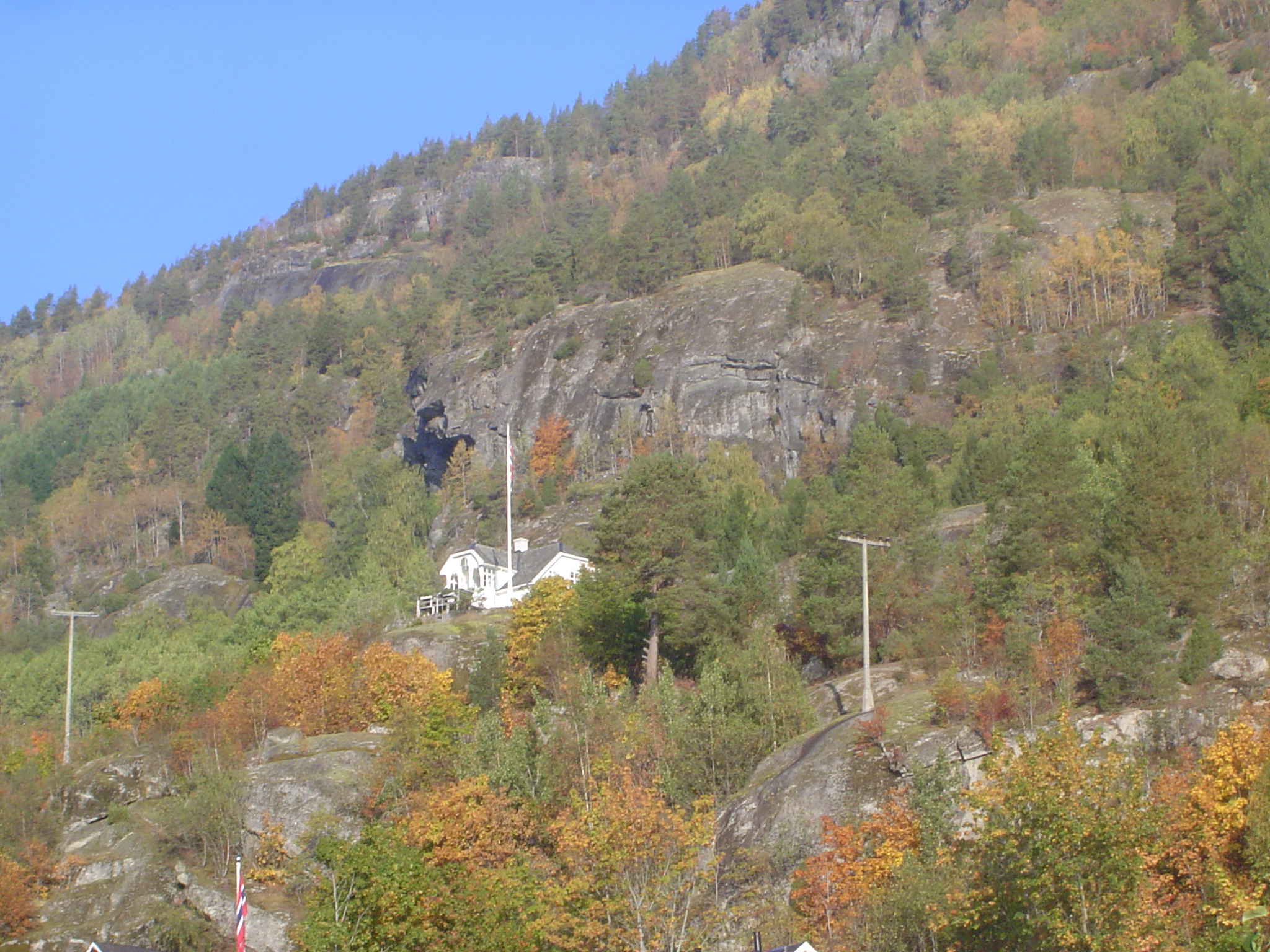 Occasional houses are spotted high on the enclosing cliffs. 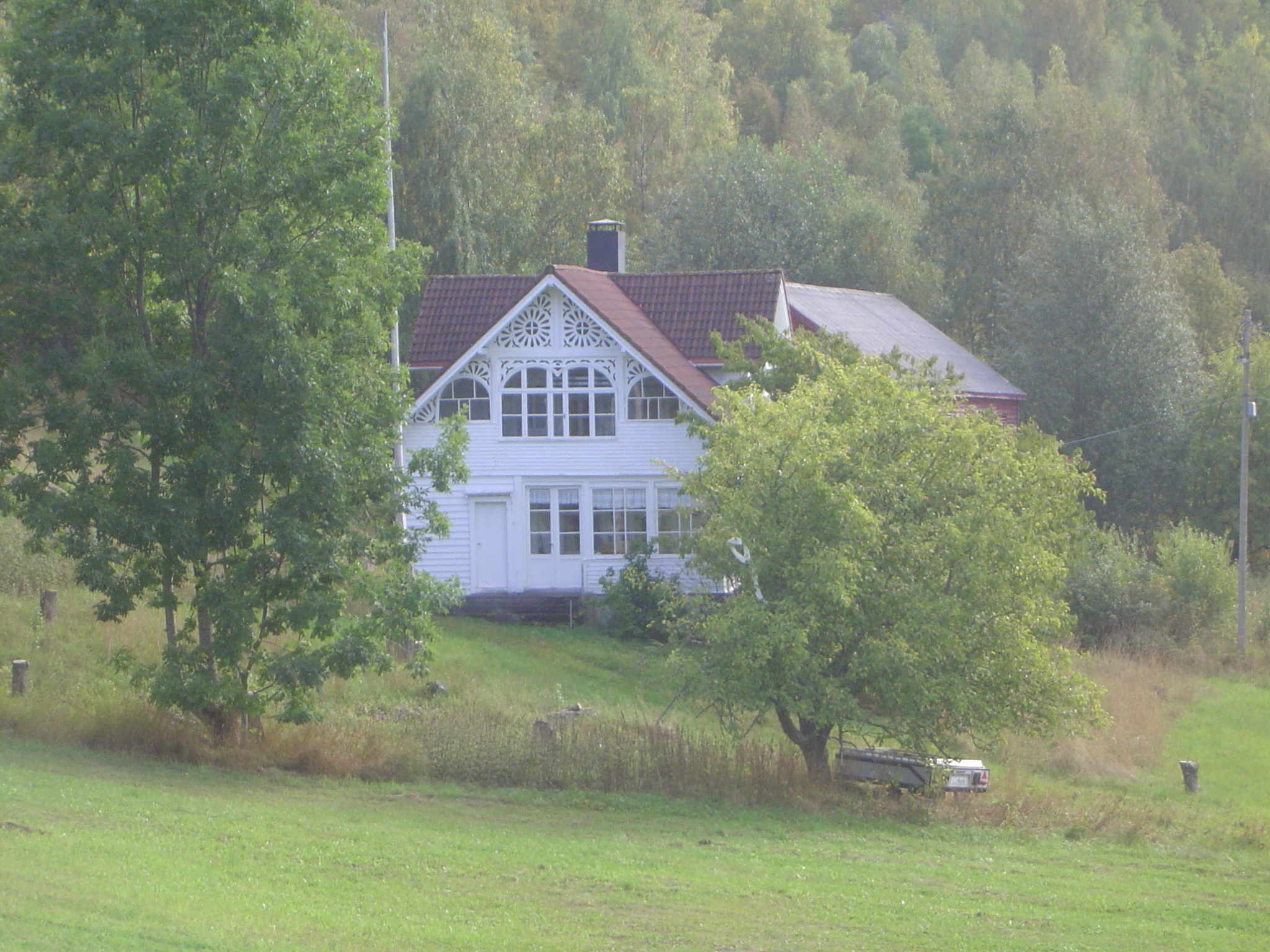 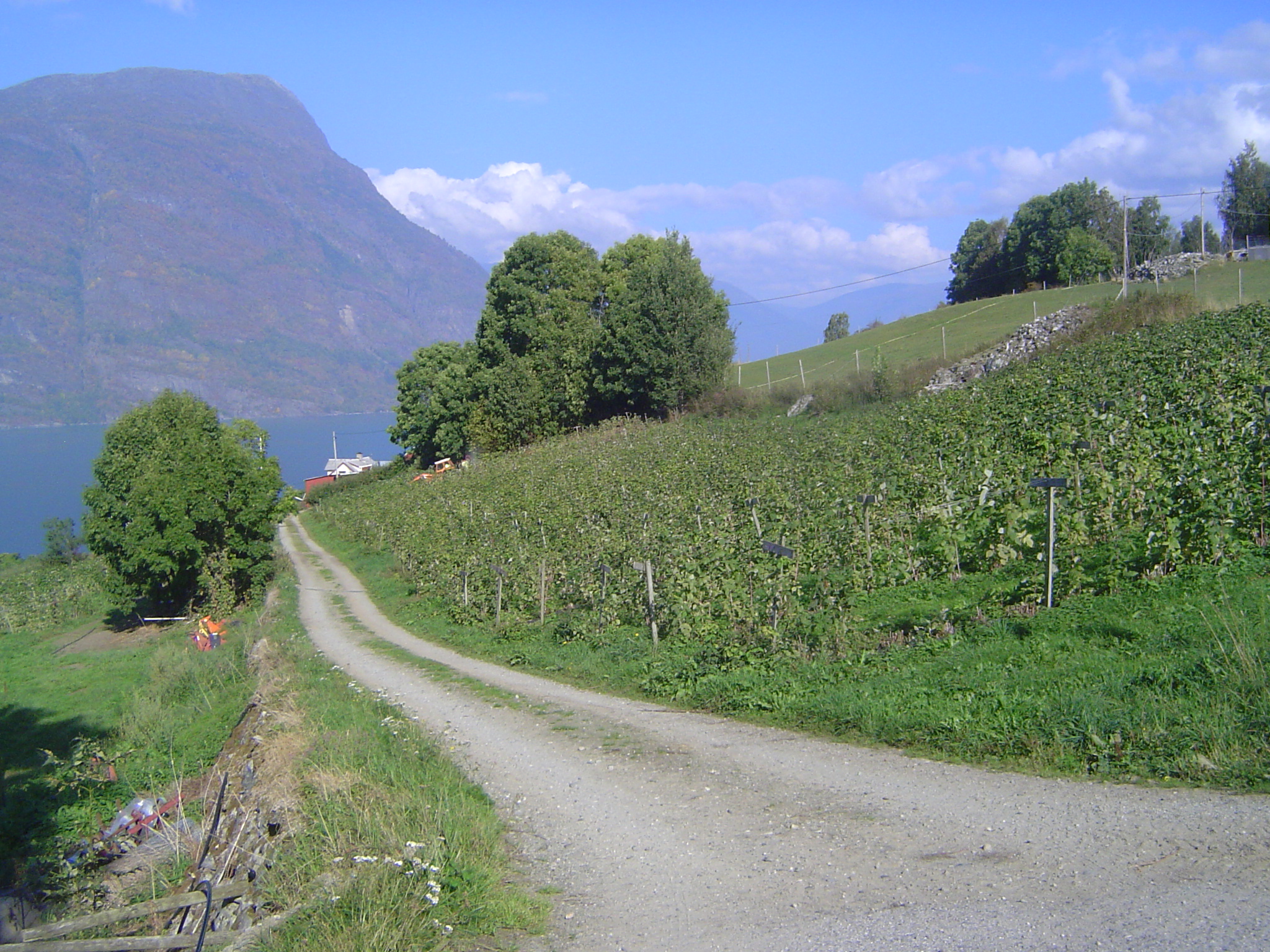 Centuries past, the crops here were barley and hay, supplemented after 1800 by potatoes. Now, however, there are many apple orchards and, as here, raspberry plots. 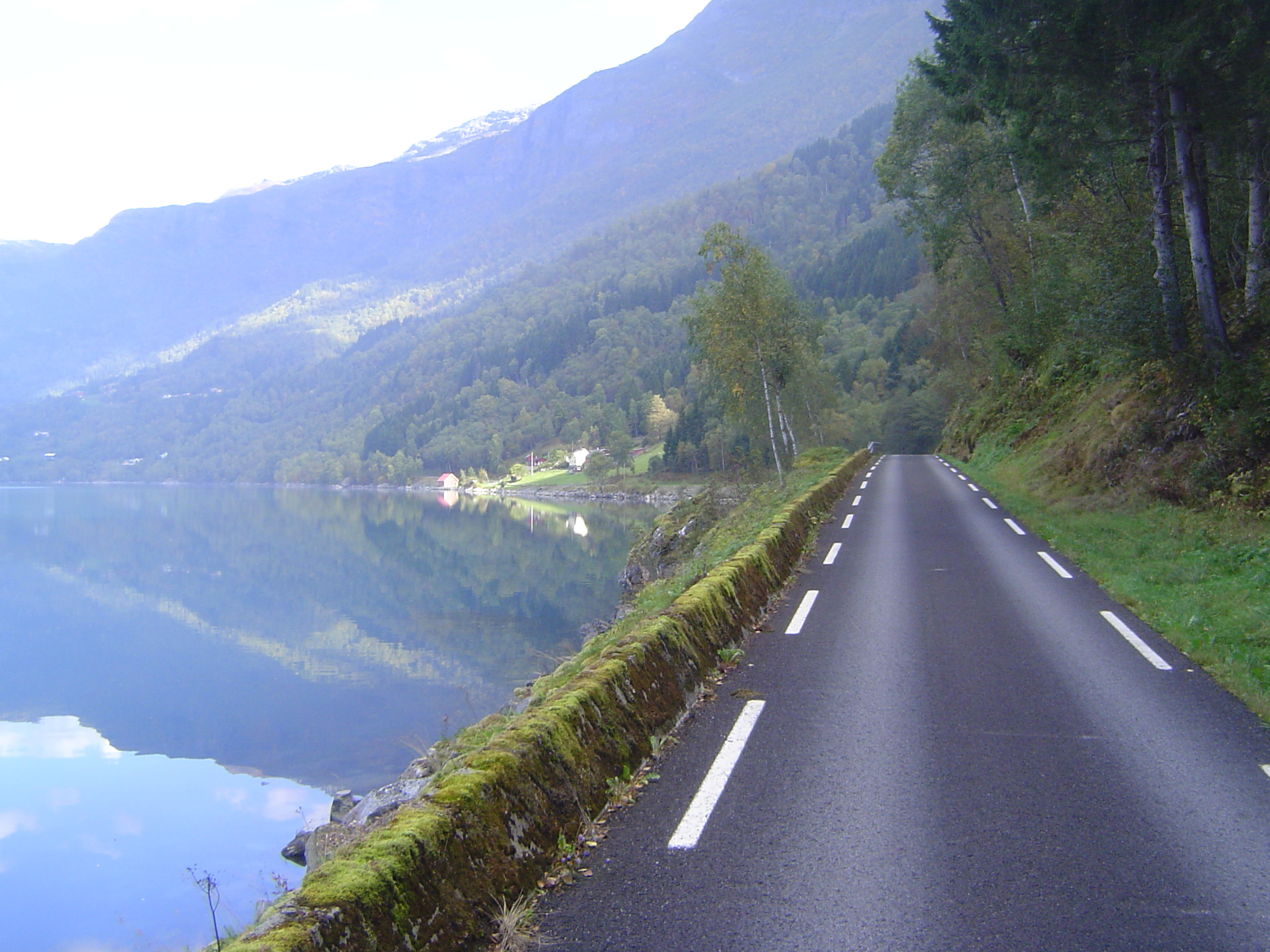 Wonder how Norway spends the income from its oil-fueled sovereign-wealth fund? Wonder no more. 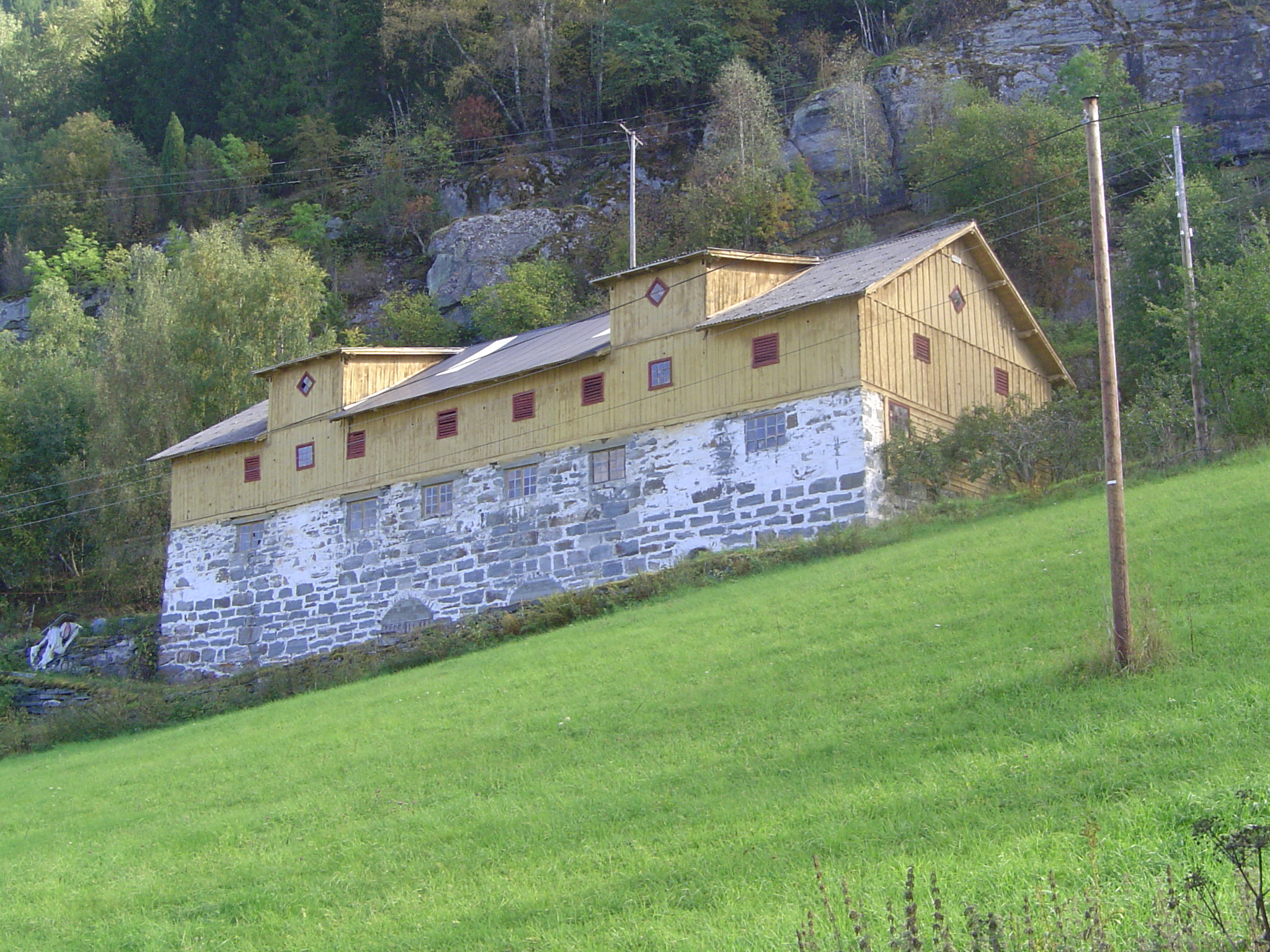 The road whizzes past old barns that remember when travel was harder. 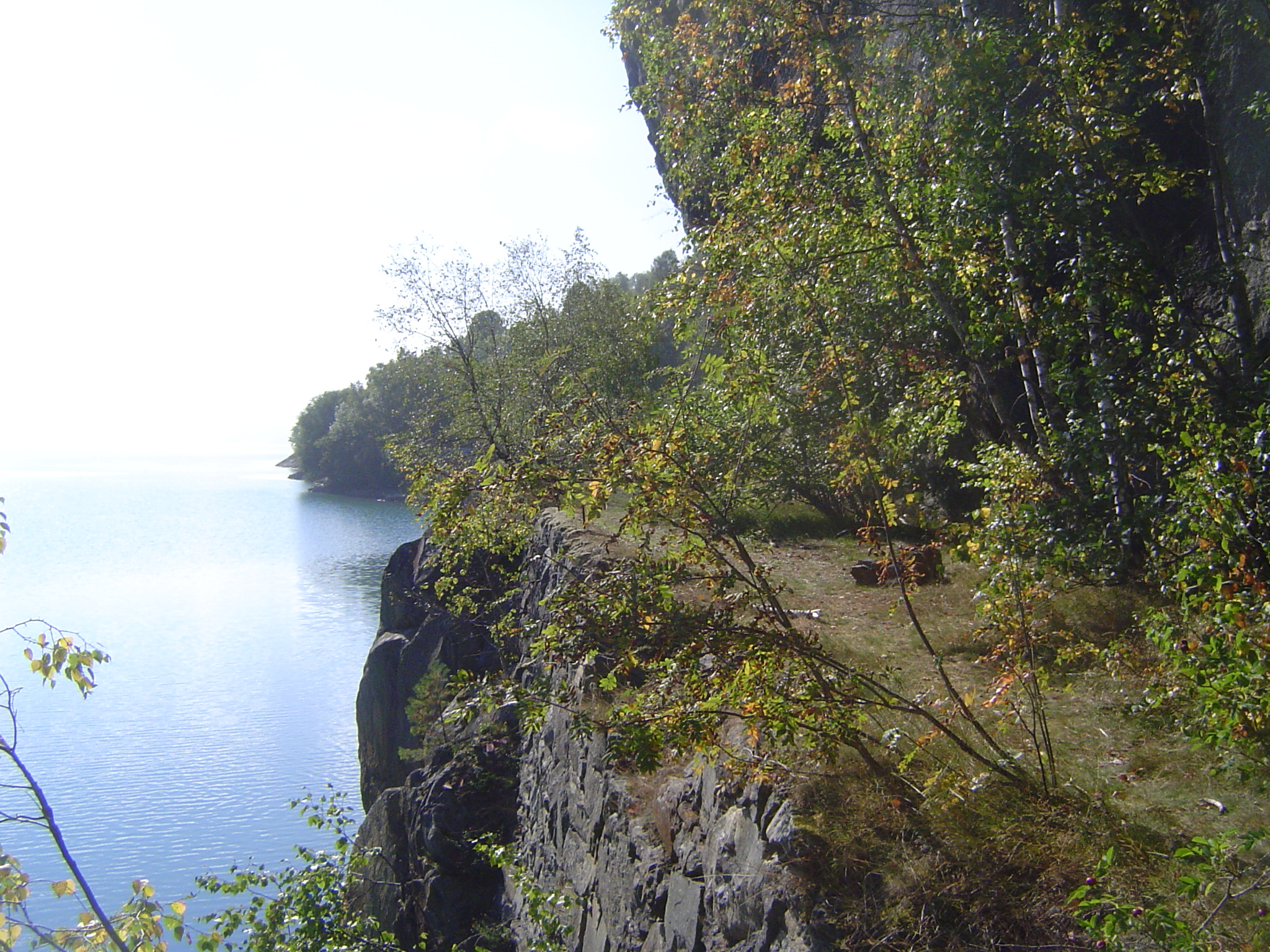 Where cliffs once forced roads to hug the water, now the roads barrel through tunnels—lots of tunnels. Here's an abandoned bit of old road south of Skiolden, the town at the tip of the fjord. The new road runs deep inside the mountain and through the Otta Tunnel. 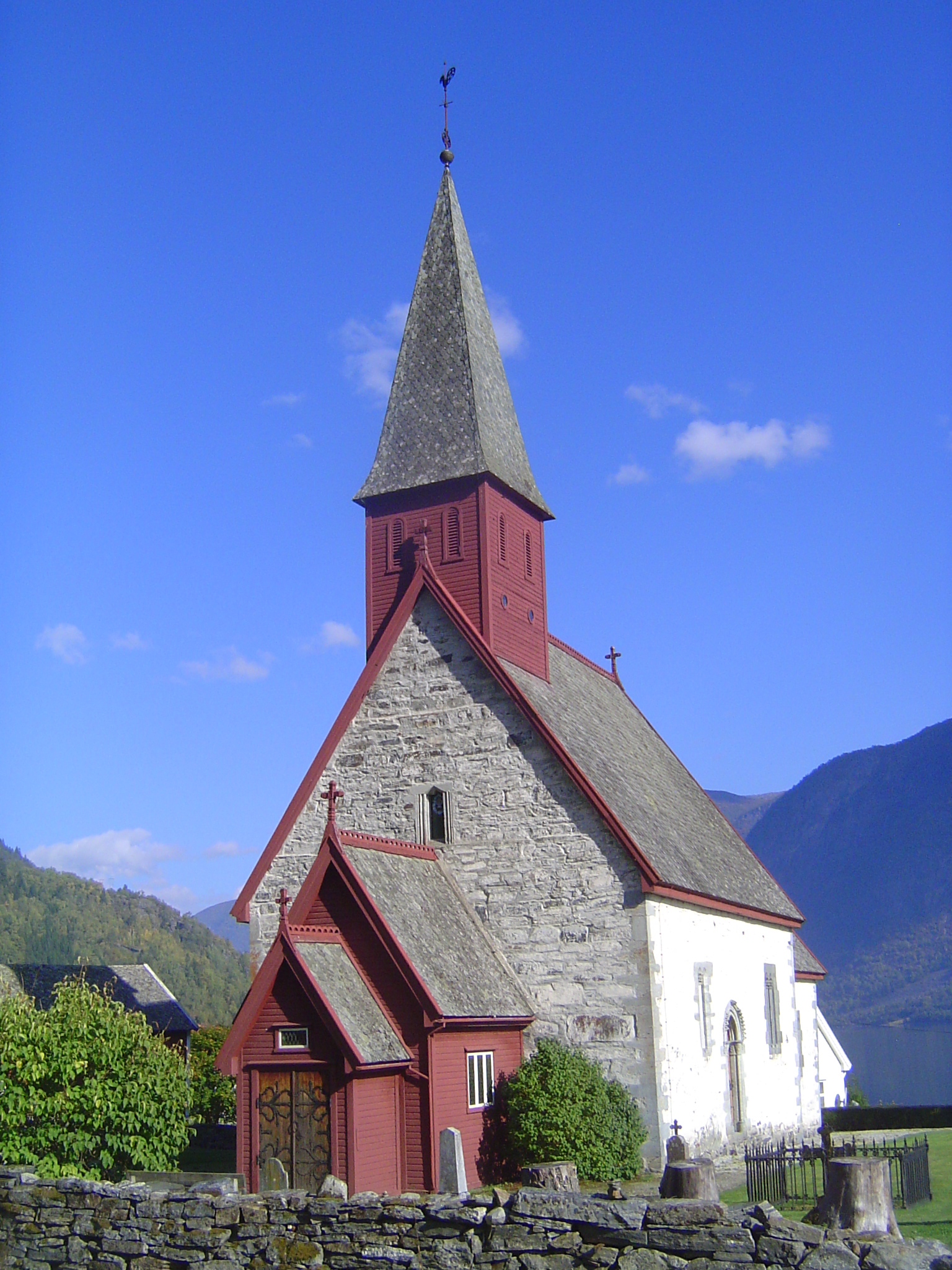 The Dale Church, on the west side of the fjord, dates from 1200, not long after the Urnes stave church was built on the east side. 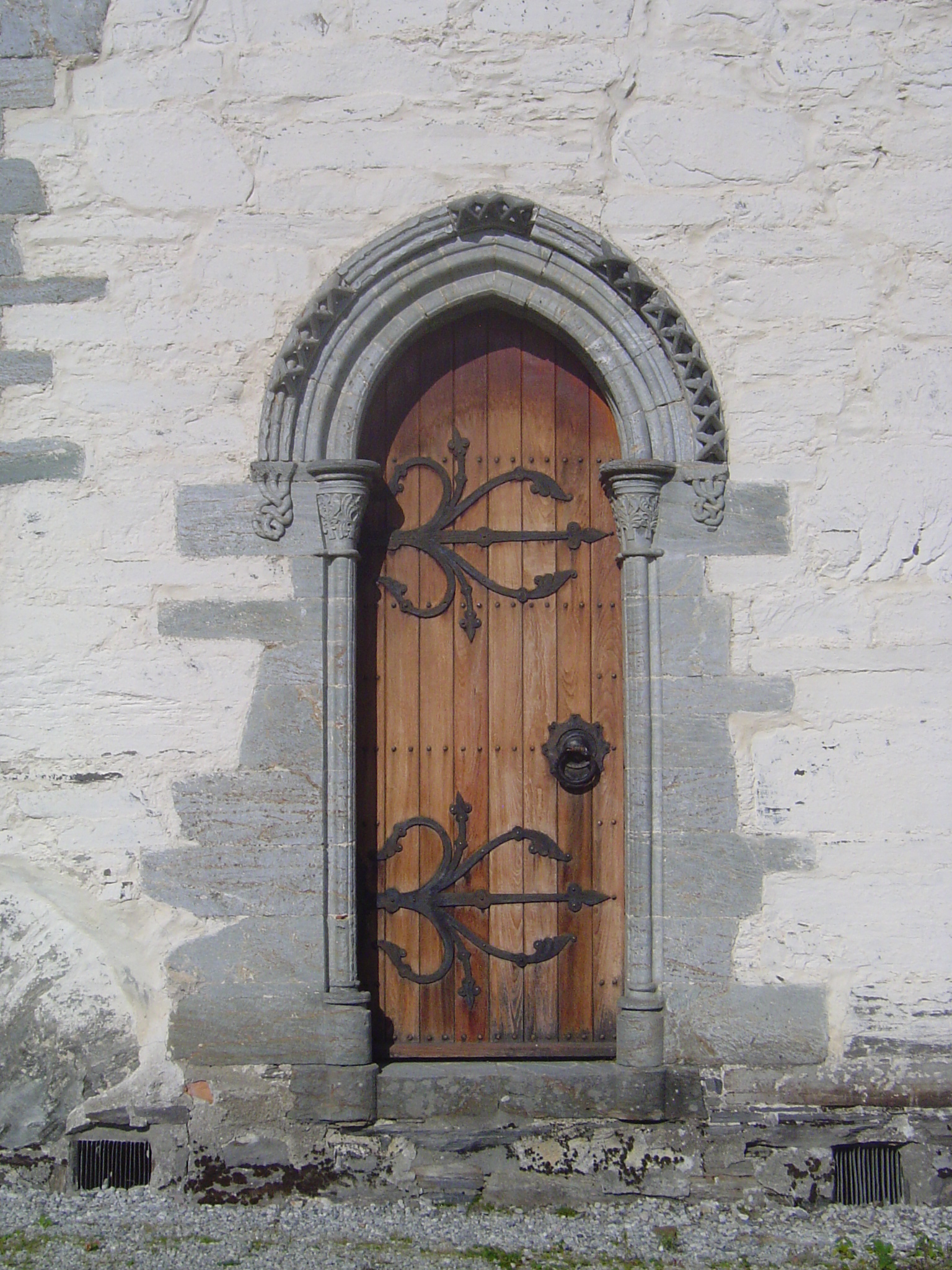 The church has been much modified over the centuries, but parts are old. 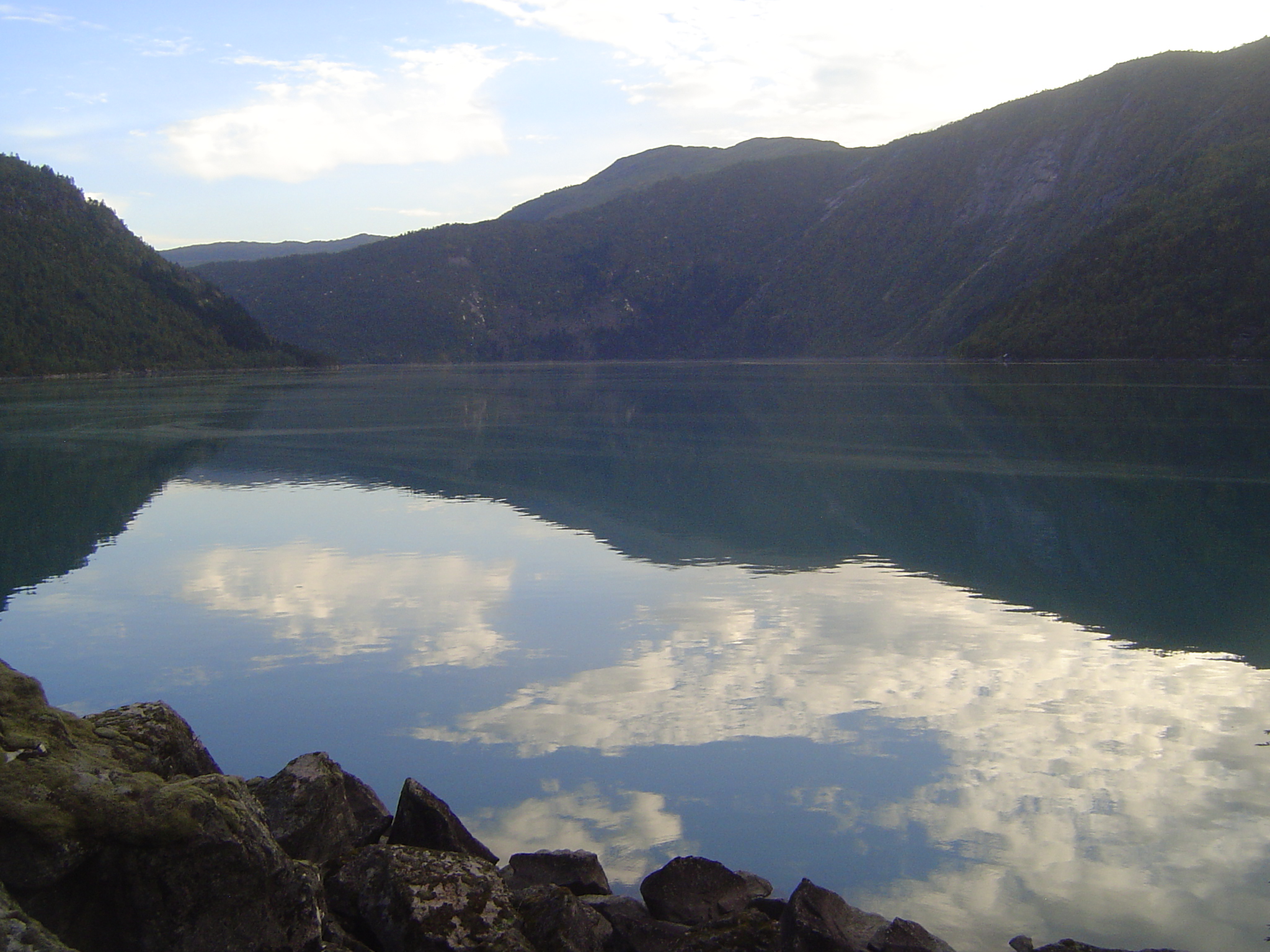 Parallel to the Lustrafjord but at a higher elevation, the Veitastrond Lake, or Veitastrondavatnet, empties into a short river. 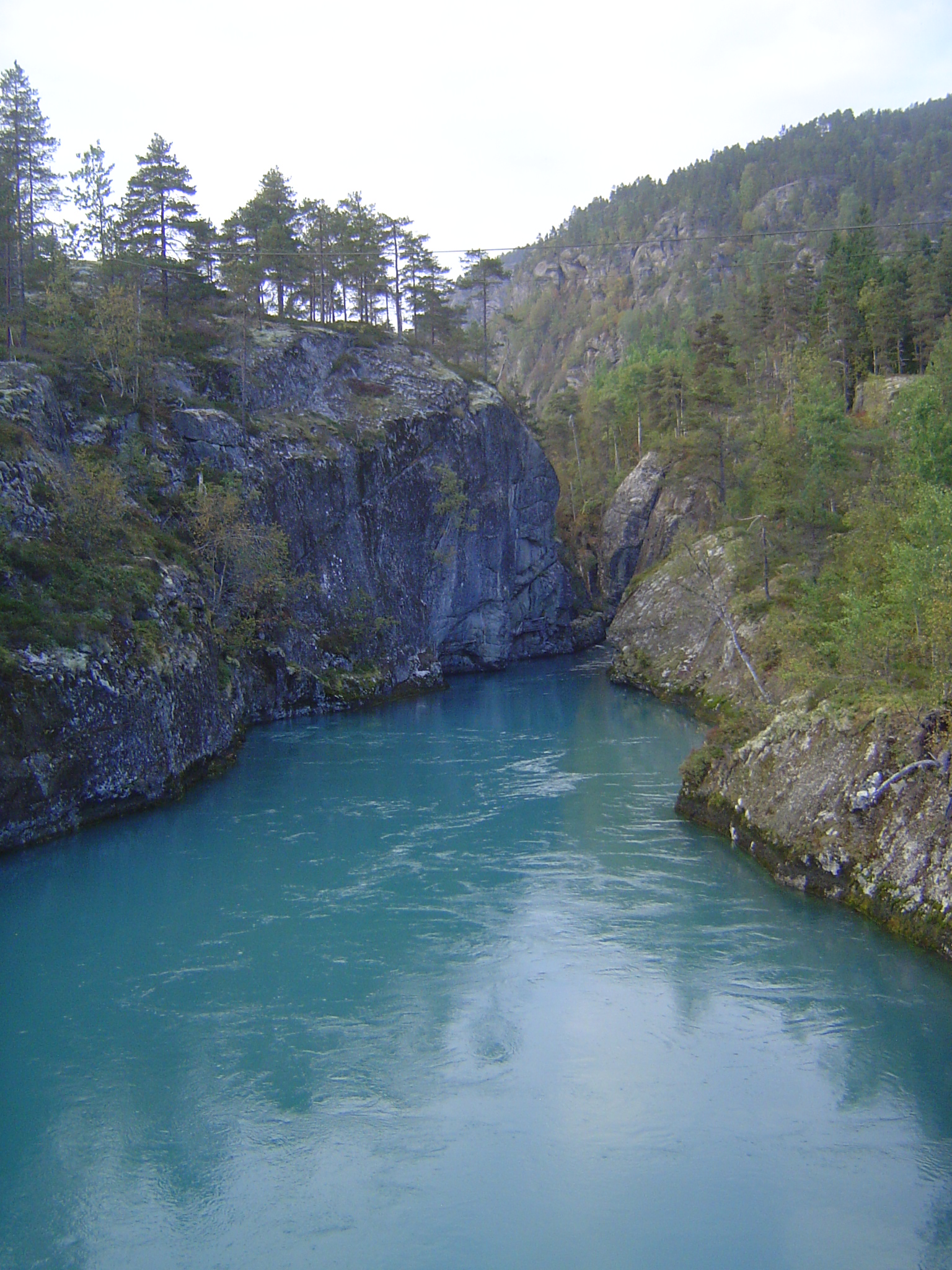 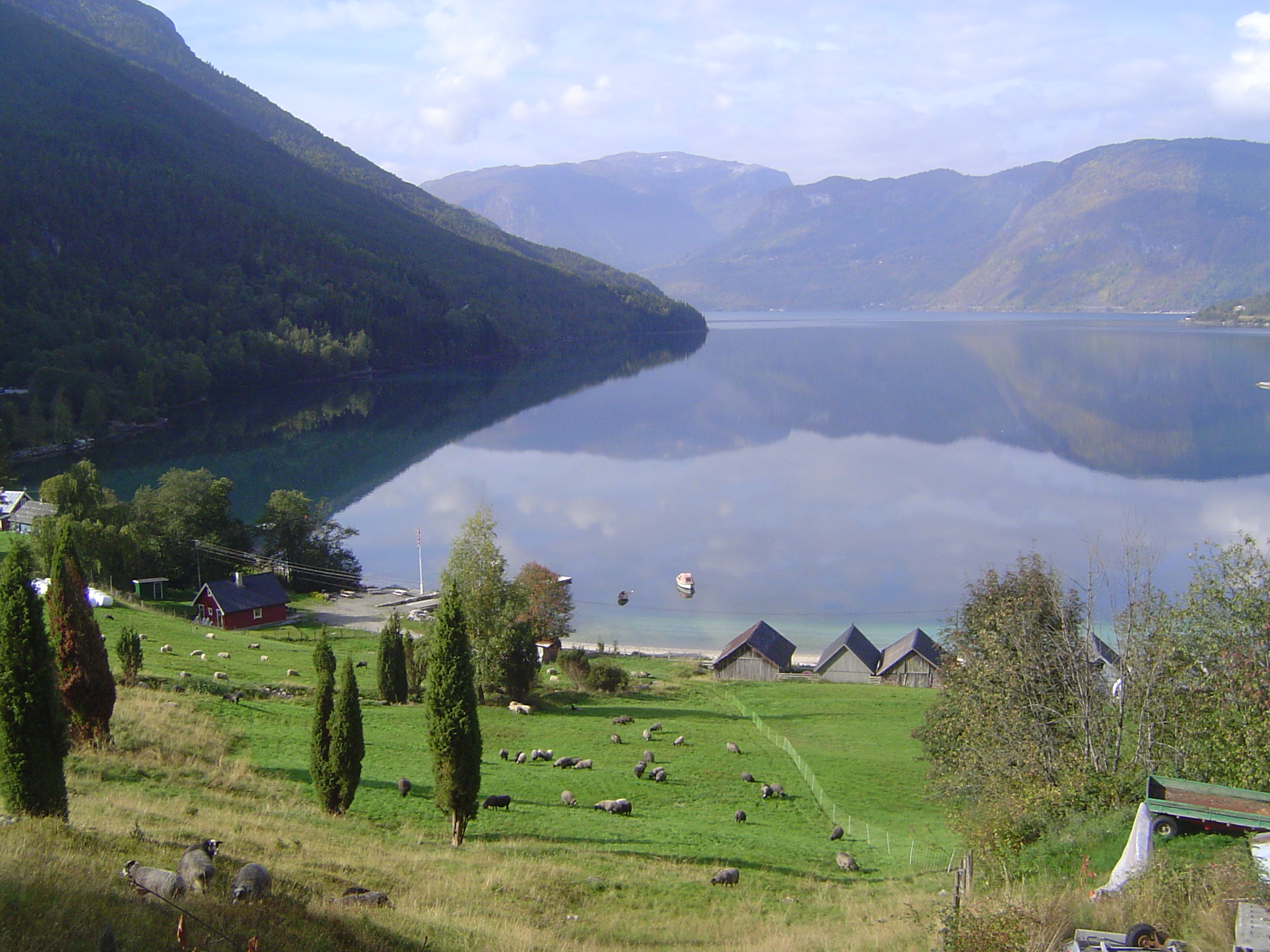 Ultimately, the lake drains into the Sognedalfjord, another branch of the Sognefjord and separated by a mountainous ridge from the main stem of the fjord. Here's the cove at Eide, with the Sognedalfjord in the distance. 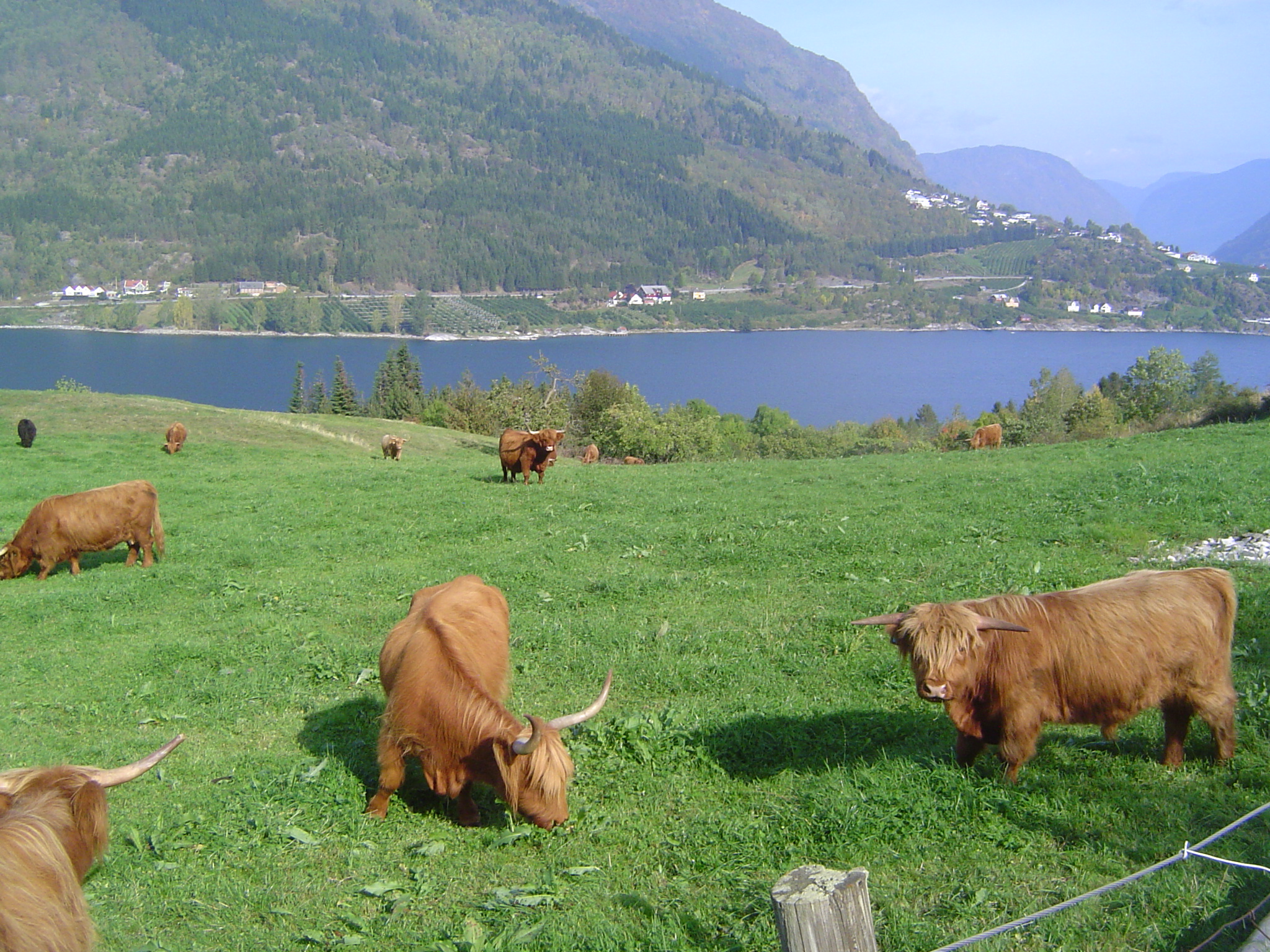 Highland cattle near Fimreite and looking toward the much more densely settled west side of the fjord. 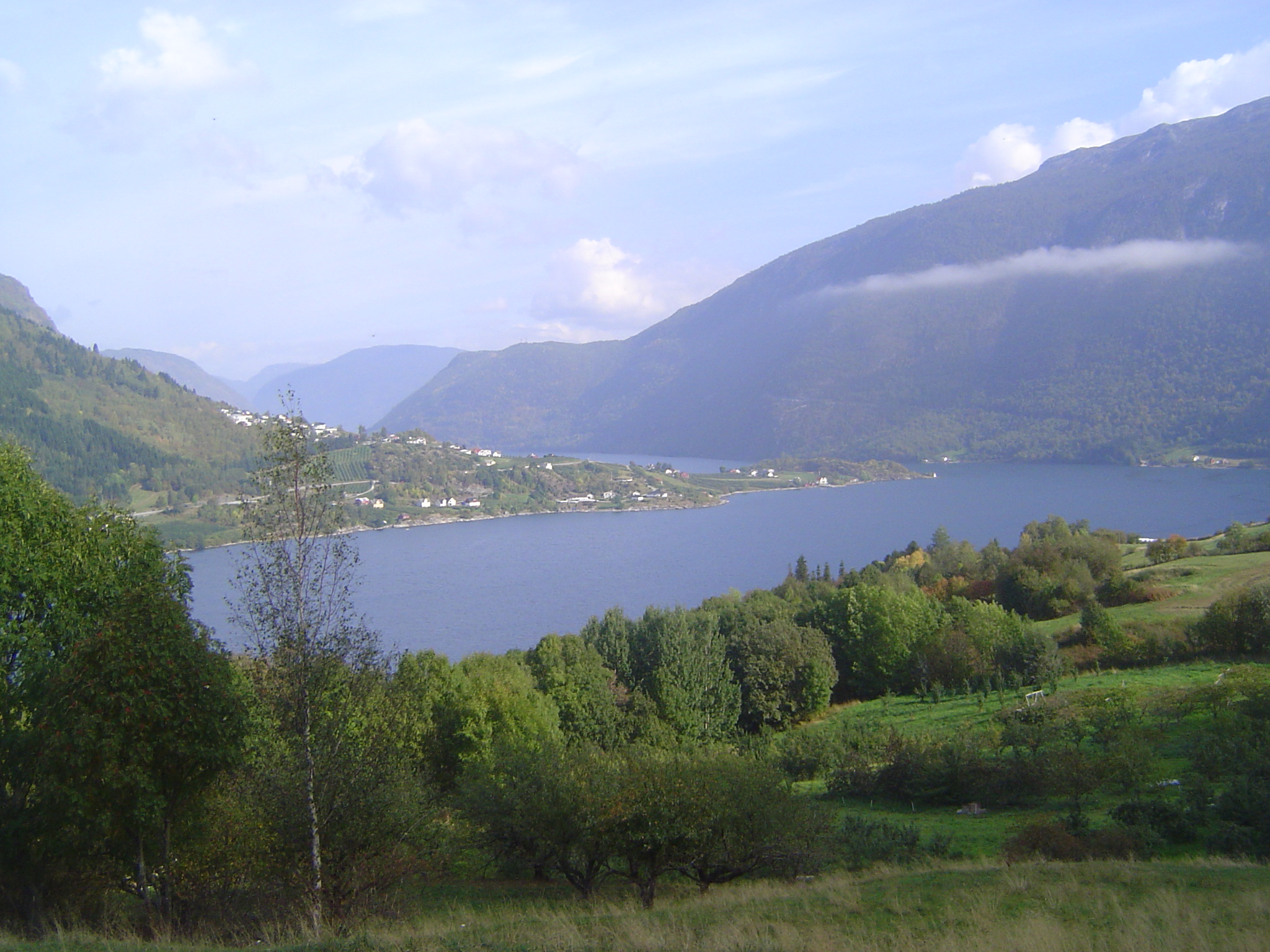 The view from Finnreite across to Nornes and up the Sogndalsfjord. 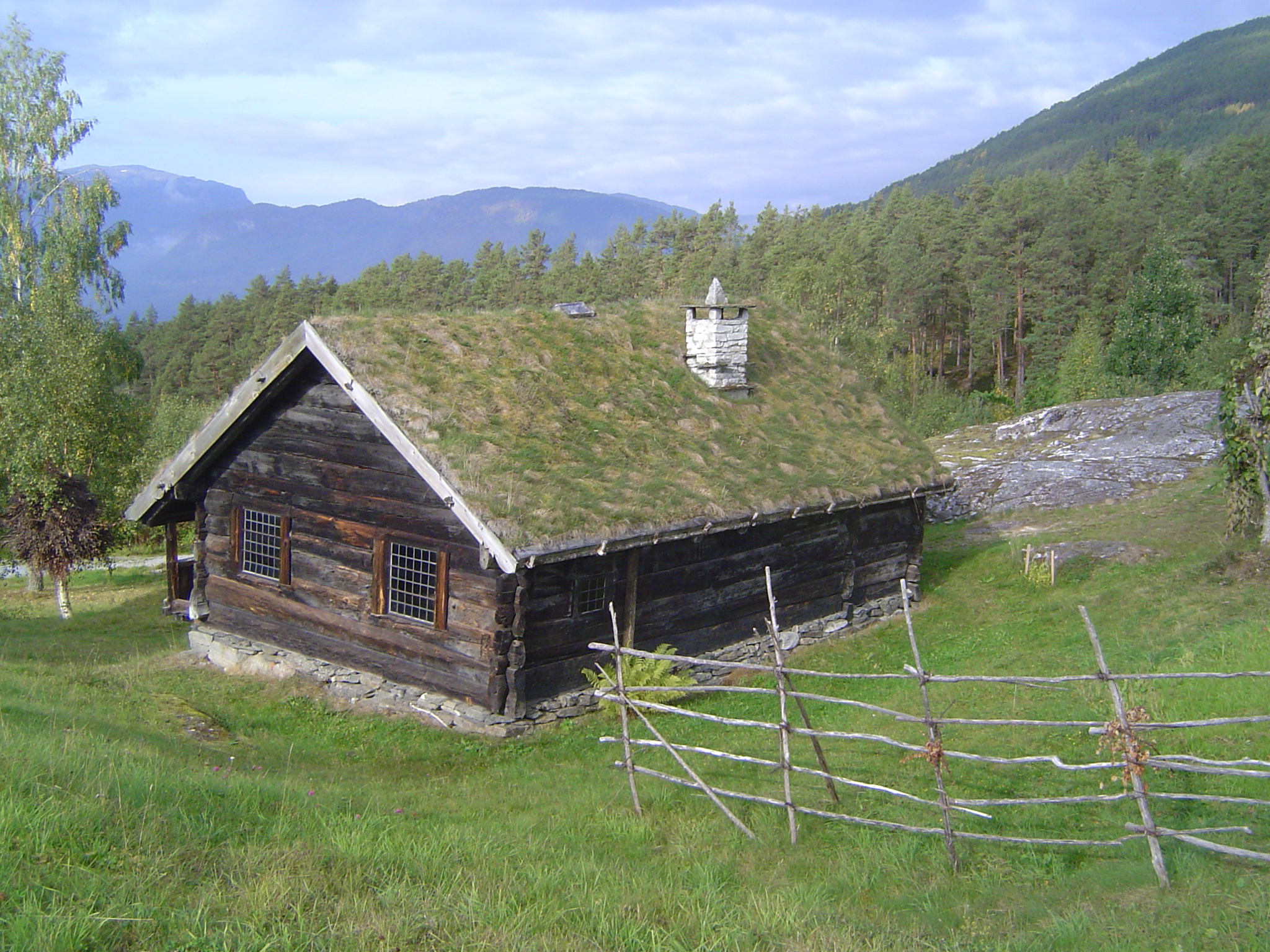 The Heibergske Samlinger, near Sogndal, is a museum of traditional Norwegian architecture. We'll spend some time looking at the "haves" and "have-nots" who lived in this world.

It was a tough, tough world. Consider the case of the Flam valley, about 25 miles to the south. In the late 19th century, nineteen families with 119 people survived on what the valley produced. It wasn't a lot. The valley had only 125 acres of cultivated land. Those acres yielded 200 barrels of barley and 305 barrels of potatoes. The families also produced 5,000 kilograms of hay for 12 horses, 109 cattle, and 330 sheep and goats. That wasn't nearly enough, so an additional 50,000 kilograms were collected by cutting grass in remote "outfields." Leaves were gathered, too, mostly birch but also elm and ash. In summer, the livestock lived off distant summer pastures that had been used since Roman times. 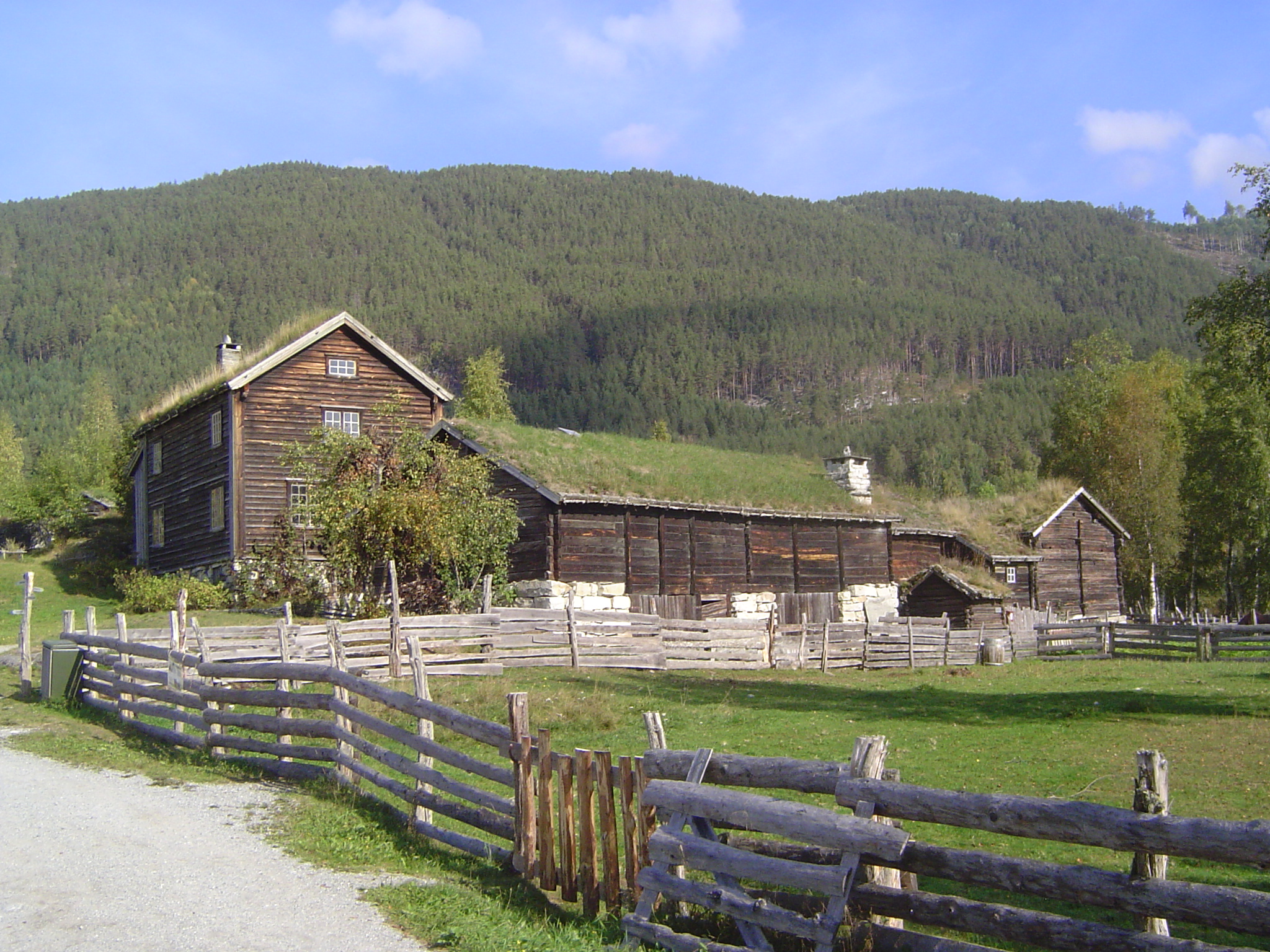 Equality? Dream on: all the Flam valley land was owned by nine families; the other ten were crofters, laborers with small patches for their own use. Here, still on the museum grounds, is a farmstead suggestive of how the fortunate lived. 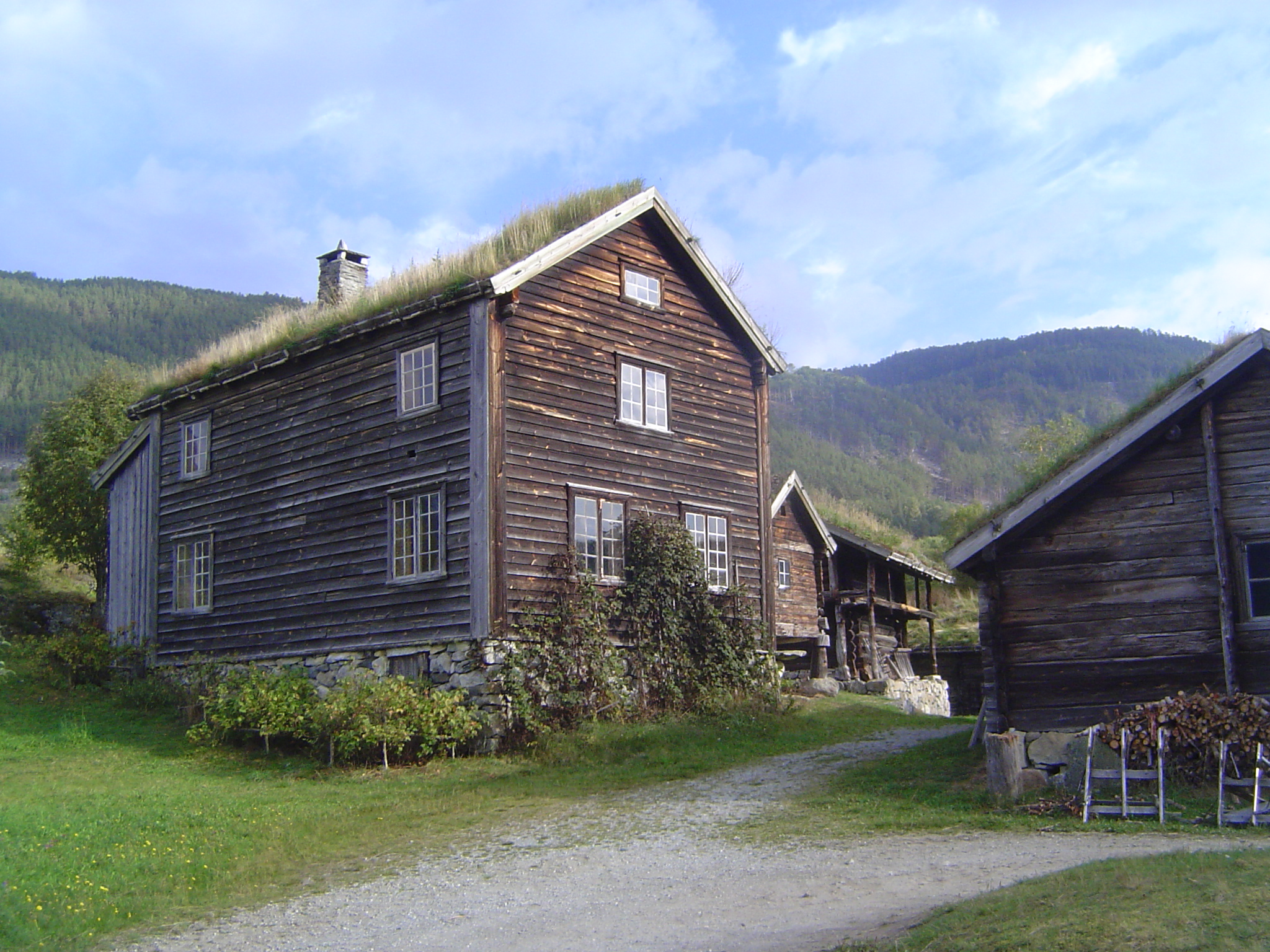 It's the Haugen farmstead, moved here from Luster, site of the stone church seen previously. It's late, dating from the early 19th century, and though it still has log walls, they are faced with sawn clapboards. The house also boasts large windows and cast-iron stoves, rather than the usual open fireplace. Despite the relative wealth of this household, 14 people lived in the house in 1913. It remained inhabited until the 1960s. 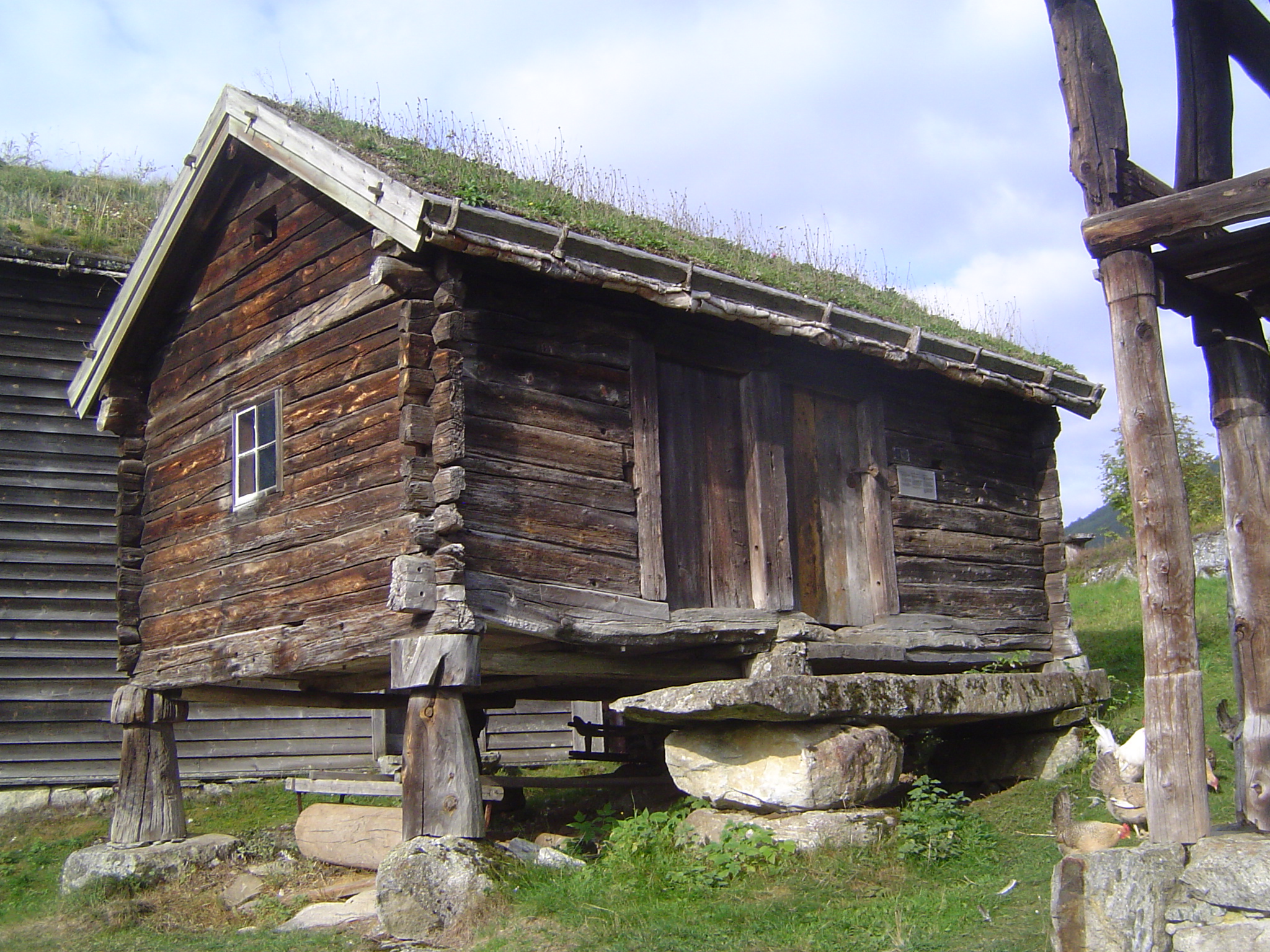 The Heljegard storehouse came from a farm next to the Haugen house. One room stored cured meats and fish; the other, grain, flour, and flatbreads. 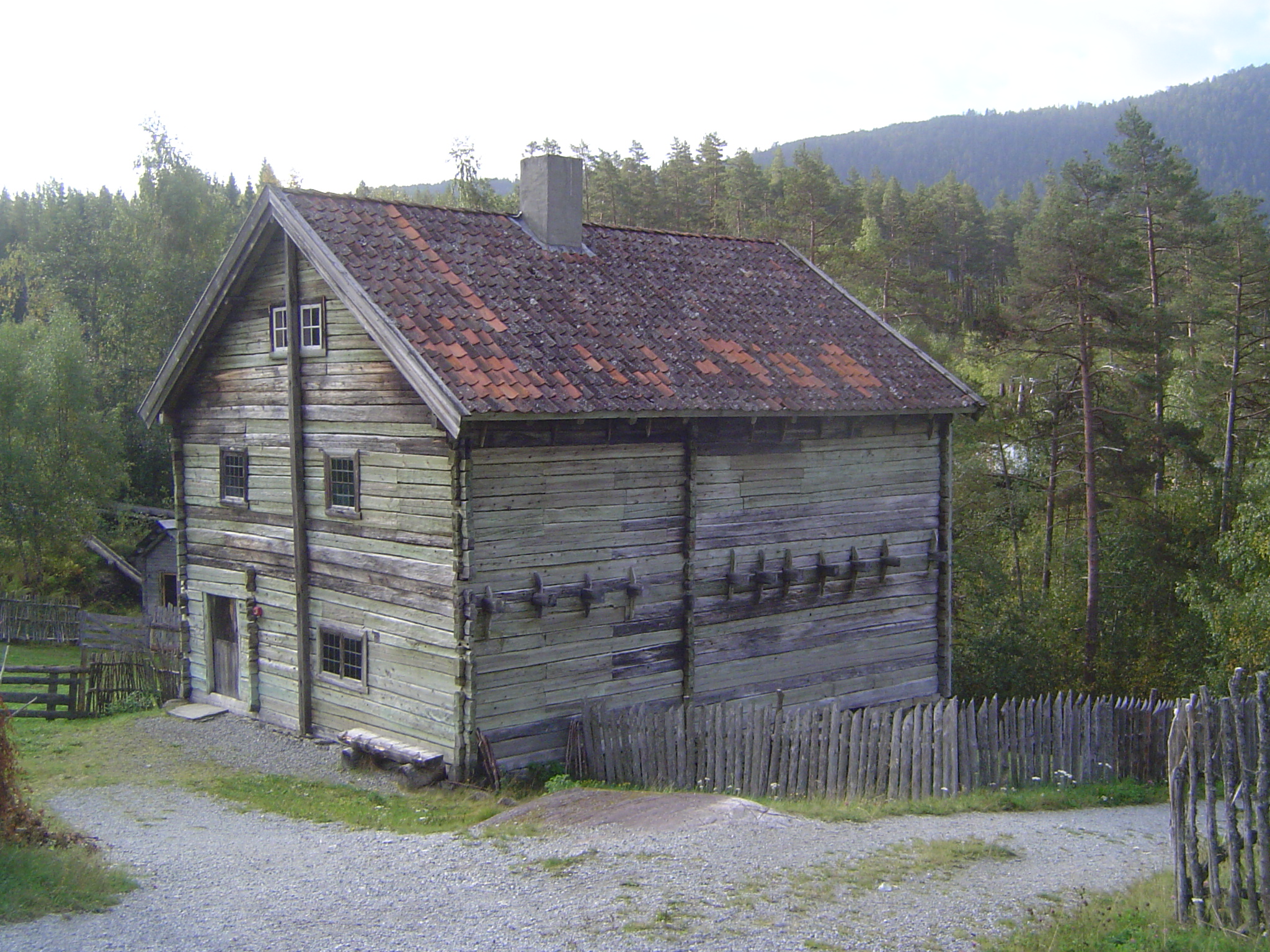 The Leirmo farmhouse was moved here from Gaupne, close to the original site of the Haugen house. It's more than a century older, however, dating to 1793. Despite a modern profile, it's a log house, though the logs have been squared. The windows are fewer and smaller than those of the Haugen house. 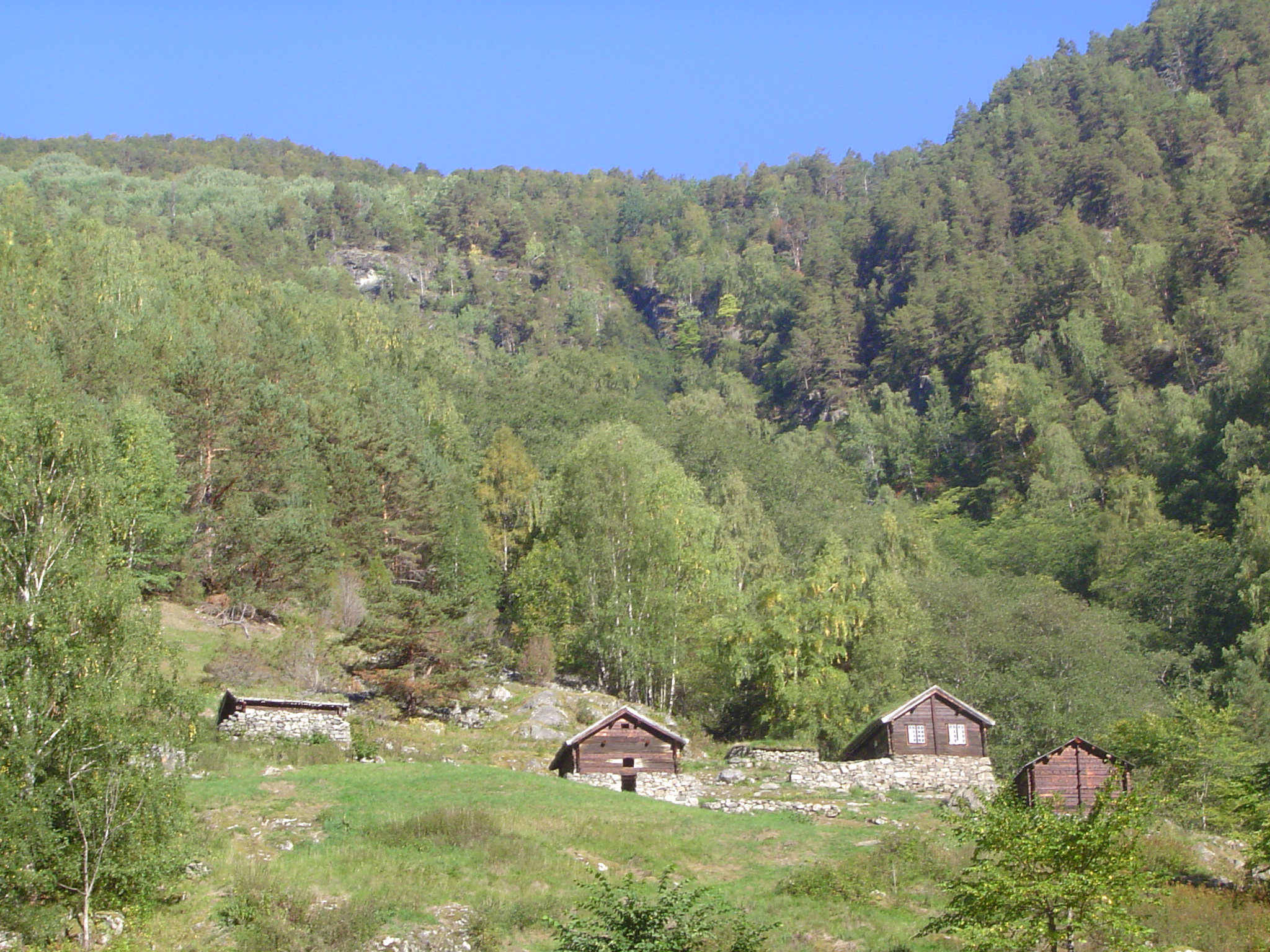 Here's a farmstead or cotter's farm in situ. It's the Galdane croft, finally abandoned in 1947, though maintained now as an example of its rugged type, with terraced (and even irrigated) potato fields, pollarded trees, hay-meadows, birch groves, and buildings. The buildings, of pine on stone foundations, include a house of 300 square feet that at times in the 19th century was home for a dozen people. There are also two barns, a goat shed, a smithy, and (on the left) a cowshed from 1814. It's the oldest building of the group.

The croft covered 27 hectares, but most of it was forest, rock, and scree: a mere half hectare was cultivated. The residents rented the croft from the owners of the Ovre Ljosne farm, six kilometers downstream. In exchange they owed the farm owners a week's labor in spring and another in fall.

Records indicate that in 1865 7 people lived here with 5 cows, 14 sheep, and 10 goats. Hay was the chief crop, but the family sowed 150 kilograms of grain and planted 300 kilograms of potatoes. Because the soil was porous and a rain shadow reduced precipitation here to 400 millimeters annually, the potatoes had to be irrigated. For that purpose, a channel from the nearby Sokni River was cut in bare rock. Because the soil was thin, additional soil was imported and placed on fields terraced to keep the soil from eroding. In summer the livestock were driven for 8 to 10 hours to "summer farms" partly to produce butter but also to keep the animals out of the grain and potato fields. To keep the animals fed in winter, trees were pollarded; in addition, weeks were spent in August and September collecting branches. The family also fished for salmon and trout. Now you know why emigration to North America began late in the 18th century. 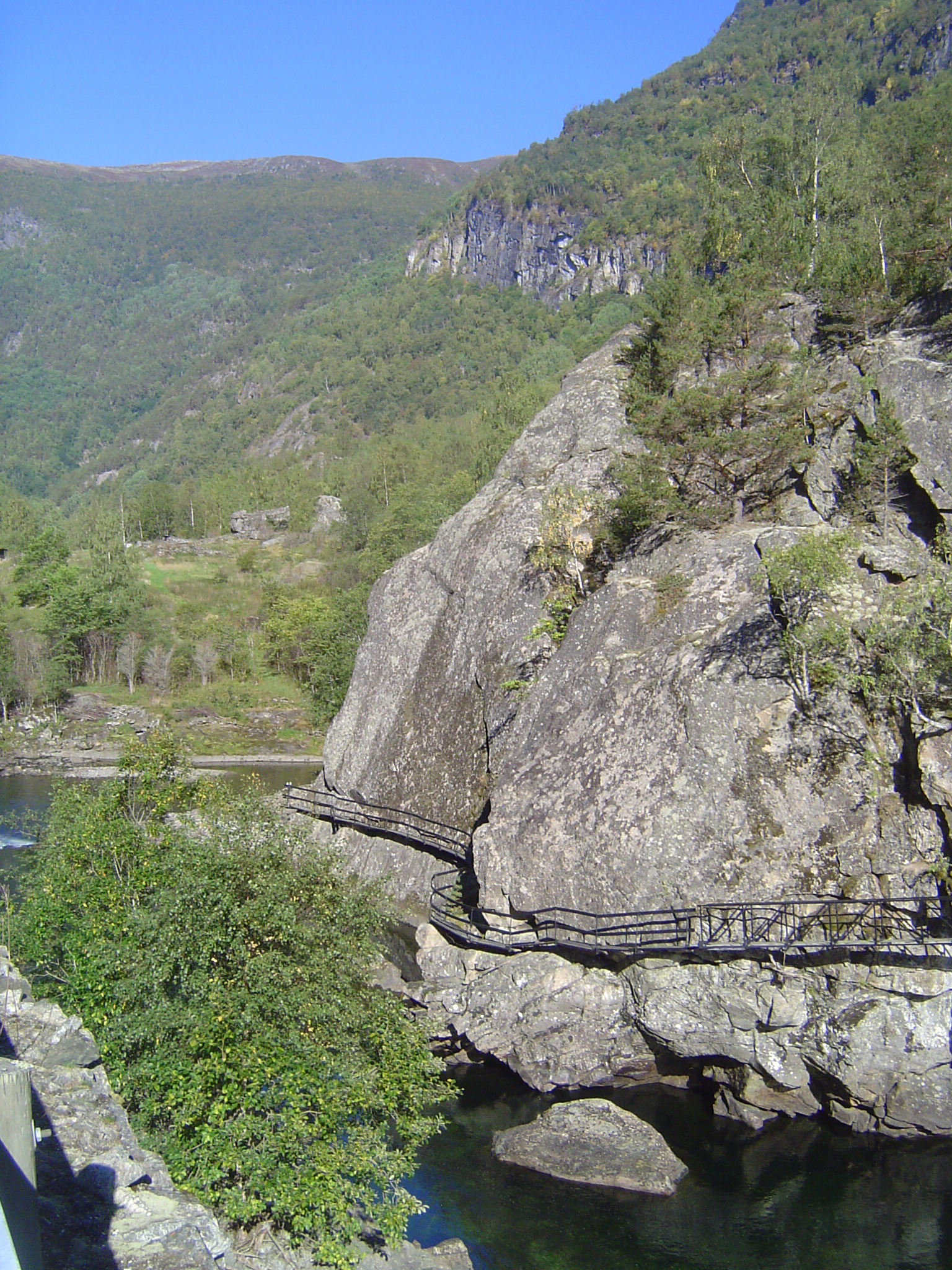 The name Galdane Croft can be traced to the year 1660, when a Lasse Galden lived here. At the same time, however, galleries like these, built around rock ledges, are called gald. The river is the Laerdal, and getting across it isn't always a lark. 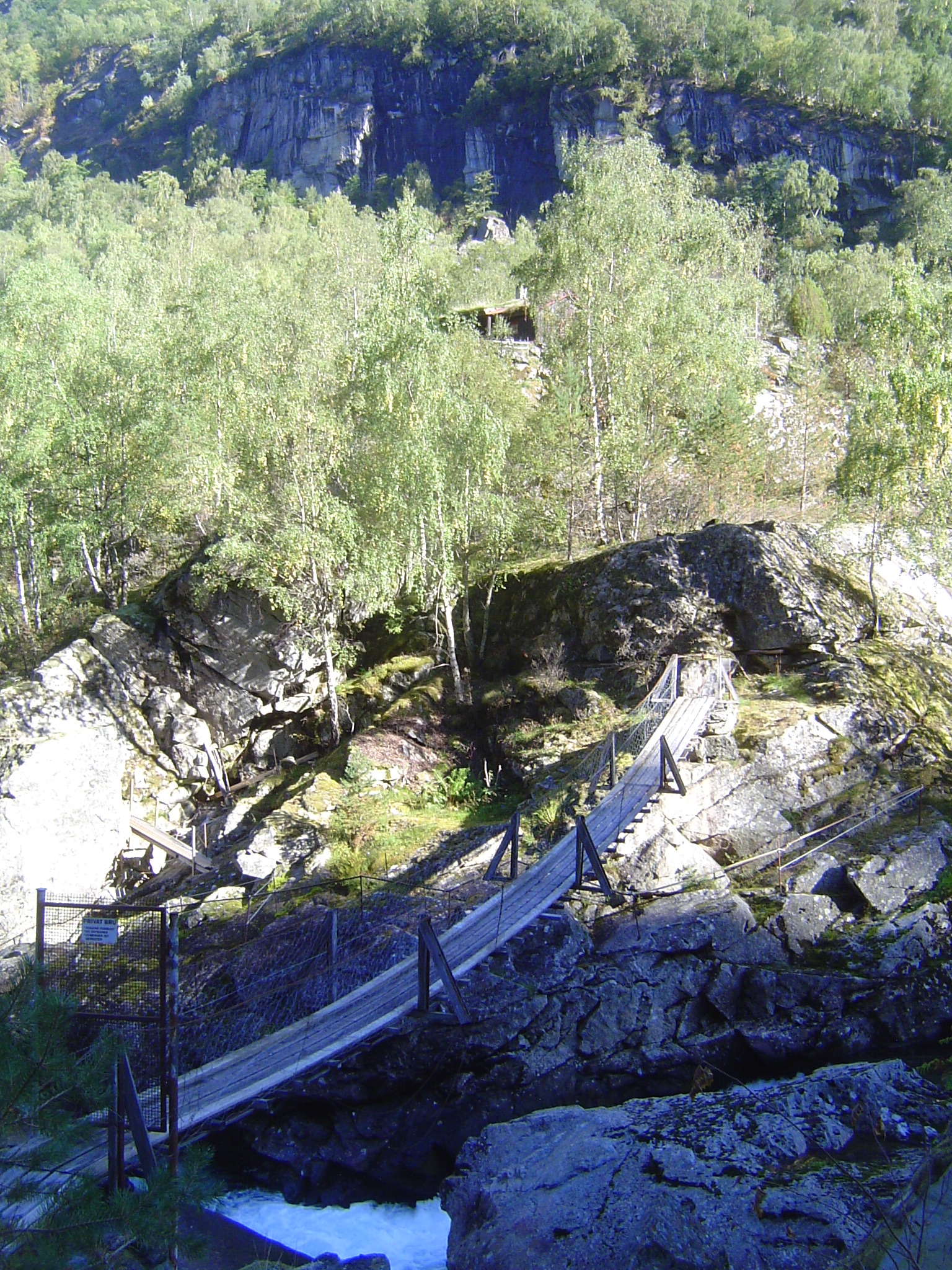 Here's a newer way to cross. 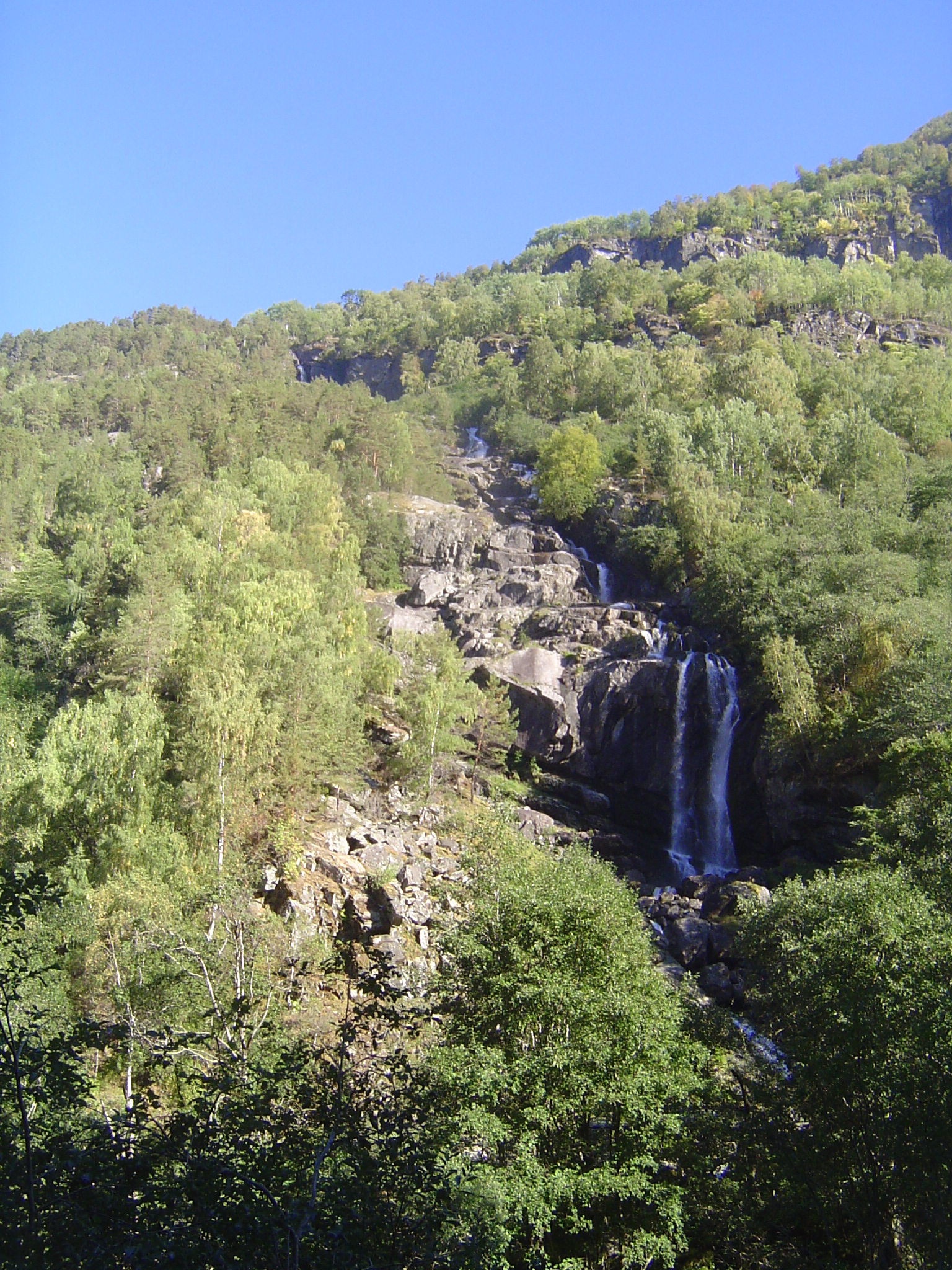 Here's the Sokni River, the old source of irrigation water for the crofter's potato field. The painter Dahl wrote in a letter in 1841 of a "lonely farm... situated on the edge of a deep valley.... [The] birches are stripped of their leaves for fodder for the animals in winter. These people struggle, often in danger of their lives, to collect hay for the winter on the steep mountain sides, which sometimes only goats could reach, as happened on my last voyage in 1839, when someone in Laerdal plunged to his death." (Quoted in Marie Lodrup Bang, Johna Christian Dahl, 1788-1857, 1987, vol. 1, p. 251.) 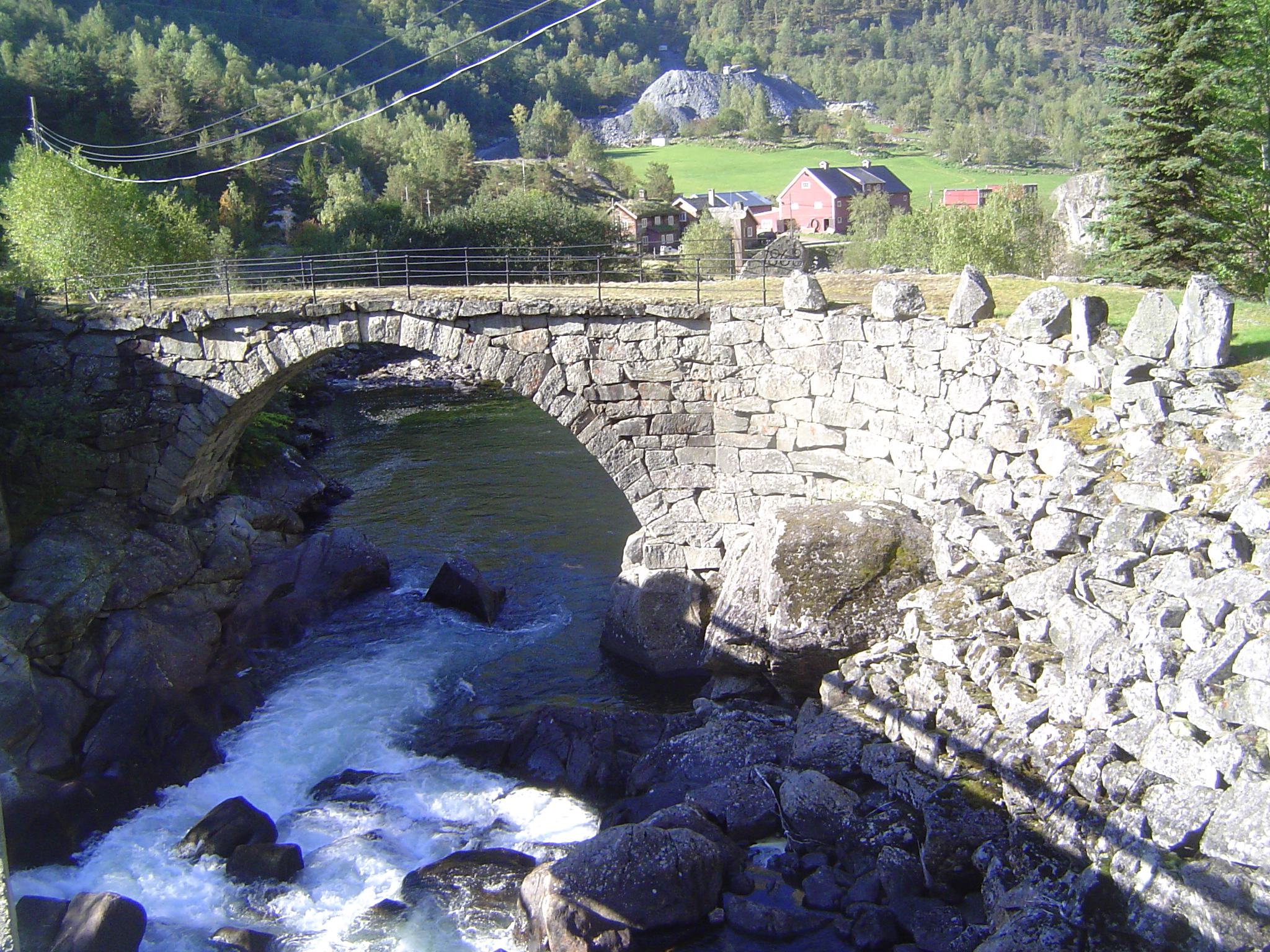 Despite its poverty, the croft faced the King's Road, the Kongevegen, which was raised to wagon-road standards in 1793. It remained the main route for travel between Christiania (Oslo) and Bergen until a railway opened in 1909. A bit of the old route survives. 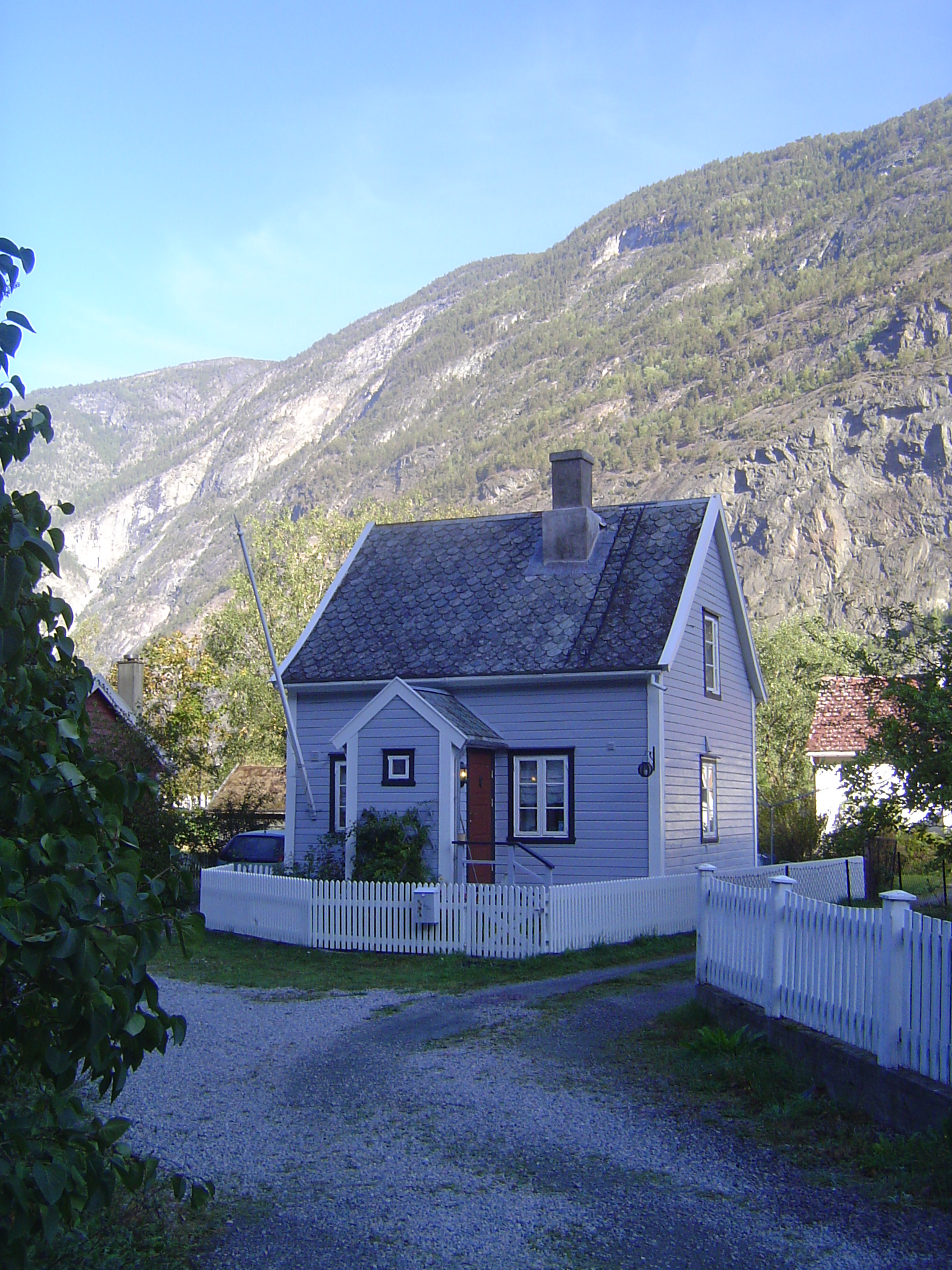 What did civilization look like in these parts? Here's a house in Laerdalsoyri, a few miles downstream from the croft. It's a tourist center now, and as tidy as can be, but the size of the house, which presumably is no older than the 20th century, is telling. 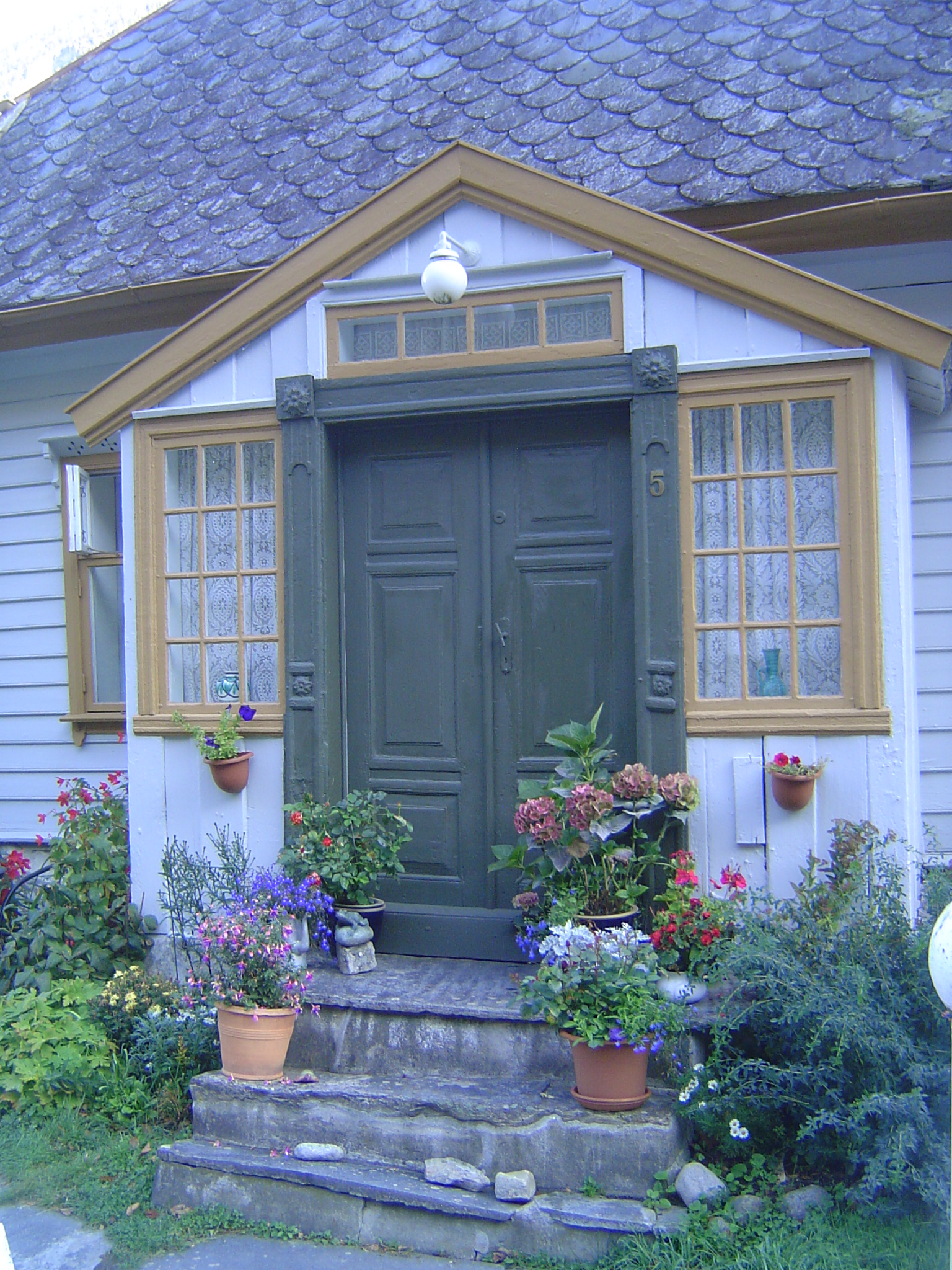 The village is in a deep valley, where shadows make the days even shorter than the high latitude alone. One solution: lots and lots of windows.